21 February 2021
While the broad mass discovers the Bitcoin for itself, one works with Filip Moritz with the Zigcoin long on the still much more profitable money printing machine with search effect!
„Neither gold nor bitcoin is the crisis currency of the future," says Filip Moritz, the world's largest Zigcoin producer. "The asset with the most stable price performance in history is the cigarette."
The so-called "cigarette" is a de-tokenized form of the Zigcoin in the form of a small cylinder-like object filled with dried tobacco (also known as a "butt" in IT jargon).
Another commonality between the two currencies is their popularity among criminals. "Without cigarettes, there would be no functioning capital market in prisons," Moritz emphasizes the importance of his product.
Users of the Zigcoin are referred to as "smokers." These can exchange the physical coin for bad breath and their own health at any time by inhaling it.
The technology behind
While one block is chained to another in the blockchain of the Bitcoin, the inclined smoker chains one cigarette to another. This is why it is referred to as a "chain smoker." With each transmutation, the inhaled smoke is overwritten to the user's genetic code via the lungs.
The smoker's reward is expressed in the so-called "hash rate". This determines how much proportion of "other plants" is contained in the smoke and has a direct influence on the body's own reward system.
Doubters and critical voices
As with Bitcoin, there are skeptics who fear that Zigcoin is nothing but hot air and could end up going up in smoke.
Filip Moritz vehemently disagrees. "The tar in the lungs and the calcification in the arteries usually remain with the smoker for the rest of his life." In this respect, he says, cigarettes are the more sustainable investment of the two.

Smokers often have deposits in the arteries for the rest of their lives. Some smokers benefit from the so-called smoker's leg.
Bitcoin still lags behind Zigcoin in other areas. The addictive effect of cigarettes, for example, is many times higher, he said. "We also had the vending machine idea long before the Bitcoin guys."
Miners and farmers
What miners are to bitcoin, "farmers" are to cigarettes, physically growing or "farming" tobacco. Here, the tobacco corresponds to the ones and zeros in the bitcoin's binary code.
The difference is that the bitcoin miner gets to keep most of the profits for himself, while the tobacco farmer does not.
"Because that's where we come in," Filip Moritz says proudly. Thanks to elaborate contracts, good contacts and excellent lobbying, he says, the company has managed to keep small farmers in developing countries in check and pocket the profits itself.
"Our contractors on the ground, we call them 'pawn catchers,' always manage to 'convince' farmers of the profitability of our business model."
As with Bitcoin, he said, it's the vision that counts, and that must be made palatable to investors or growers. Hence the term "pawn sacrifice." 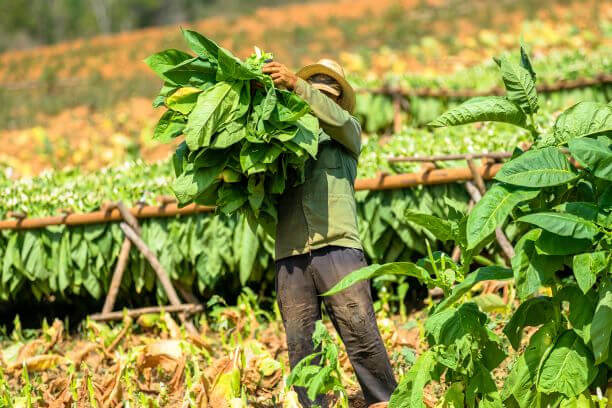 Proud tobacco farmer at work
Drum prüfe, wer sich ewig bilde
Filip Moritz is helped in this by the "education" of the farmers – or rather the lack of it. Since the farmers have often been working on the tobacco plantations since childhood, "school" is a rather abstract term for them, which they would first have to look up in a dictionary – "if they had one," adds Filip Moritz with a wink.
Profits with leverage
Since many of the farmers are also smokers themselves, PM profits twice over, he says. "The great thing is, they sort of pay us for the product they grow themselves. We buy the product from them for a knockdown price and sell it back to them later at pharmacist prices!" enthuses Filip Moritz. "So it's the ideal win-lost situation."
He adds that the pharmacist should not be taken so literally. After all, local medical care is usually not all that good. "When the smoking farmer eventually dies off, after the family savings have been invested in treating his smoking diseases, his children come in and take over our gag leases." This is how this fine tradition is passed down from generation to generation, he said. "For all eternity," Moritz hopes. "Since usually the farmers' children also work on their parents' plantations, they already know how the business works." That saves on training time, he adds.
But Filip Moritz wouldn't be Filip Moritz if things didn't get even better. "Because farmers are growing tobacco instead of food for local people, thanks to our profit promises and cleverly trumped-up contracts, countries have to import food at a high cost. And now guess why I'm invested in food stocks." *grin

Filip Moritz has been advocating for years for the injustice of the little guy
Investing in the Zigcoin – knowing how
The Zigcoin is traded through a so-called "wallet", where it is paid for with the country's standard fiat currency. Fiat, by the way, means "let there be" ... "Light!", the Zigcoiners add, referring to the flickering of the lighter when the cigarette is lit.
One big advantage of the Zigcoin: Compared to bitcoin, the price trend is far less volatile. According to Filip Moritz, the danger of price collapses on the cigarette market is virtually non-existent. "The prices of cigarettes have been rising for decades and that will not change in the future!"
So how can you participate in the Zigcoin boom and invest in mining your own future?
Filip Moritz has a simple tip: "If you're already smoking, smoke some more - and if you're not, finally fucking start!"
To investors and inhalers, he recommends getting in as early as possible: "The sooner you start and the more steadily you increase your dose, the less you have to worry about your retirement savings.
Beginners can find a guide to starting a successful smoking career here!
Download now FOR A FEE!